blindfold simul by Grischuk and an extensive interview for Marca 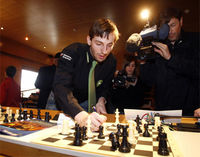 Grischuk signing the boards
after the simul

The 26th edition of Linares Chess has been presented in Madrid last week. The presentation featured press conference with the mayor of Linares Juan Fernández and the president of the Spanish Chess Federation Javier Ochoa, as well as a blindfold simul by GM Alexander Grischuk, very similar to the one by Ponomariov a week ago in Guipozkoa.

A video of the simul is available through Marca TV, the online video edition of the most popular Spanish sports newspaper, at this link, reported the Chessdom.com correspondent in Spain, Mario Rodriguez.

Yesterday, an extensive interview with Grischuk appeared in the printed edition of the newspaper as well. 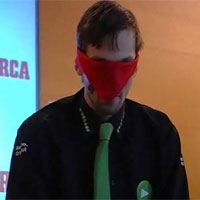 Grischuk during the simul

So you did not have any problem remembering the position of the pieces during the blindfold simul?

No, besides the initial fear, the only negative thing about the whole situation was the red blindfold on my eyes… I looked like a terrorist!

Where is your limit in blindfold chess? How many games can you play without losing control?

I think I can play up to 10 games without any problem. From that point on comes an unknown world, a type of a black hole, where I do not have an idea what could happen.

Some Russian coaches discourage exhibitions like this one, saying it is dangerous for the health. Gary Kasparov agrees with them.

To that I was refering, there should be a limit of about 10 games because of the stress for the brain. Increasing the number of games could be a success, but also a disaster. But I would like to point out a story I heard. A chess player with brain tumor in initial phase played a blindfold simul against many players, and his simptoms disappeared.

You played in Linares eight years ago. You shared second place then. What are your expectations for this year?

Eight years ago I was weaker and did not have experience, so my result was good. Now I participate in all tournaments with the only goal to win, and Linares 2009 is the most difficult I have been in together with Mexico 2007.

You have been in Spain many times, how do you feel here?

Spain is a beautiful country, the cities I know the most are Madrid and Barcelona. The only thing I complain about is that not many people speak English. But I love the food and the Spanish wine! 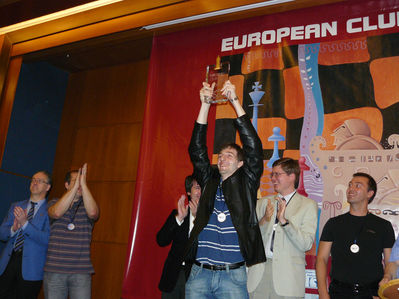 The tournament will take place from the 18th of February until the 8th of March and will have a total prize fum of over 300 000 eur. The winner takes 100 000, the second gets 75 000, etc. As the organizers explained, not giving fixed prize funds to the players is one more incentive for fighting chess.

Chessdom.com will have daily live games from Linares, as well as photos, interviews, and news from the event.