With 7.5 out of 8, she is full two points ahead of the competition

St. Louis, Oct. 12, 2009 – Anna Zatonskih clinched her second consecutive U.S. Women’s Chess championship by defeating Sabina Foisor in round eight of the 2009 event at the Chess Club and Scholastic Center of Saint Louis.

With one round remaining, she has acquired a near-perfect 7.5 out of 8 points and will win the record $15,000 first prize. No other woman has more than 5.5 points so Tuesday’s final round will be for posterity, not place.

Zatonskih, of Long Island, N.Y., said she will still try hard. “It doesn’t feel right to win the championship and lose the last round,” she said.

Zatonskih also earned an automatic qualification to the 2010 U.S. Women’s Chess Championship. She said she was nervous today for the first time all tournament, knowing that single bad move and “I could easily spoil everything.”

Zatonskih, who has won all of her games with the black pieces, entered a slightly better ending against Foisor. The defending championship pressed ahead and found a stunning coup de grace — a sacrifice of her bishop, her last major piece, that resembled a famous game played by Grandmaster Alexei Shirov. Jettisoning the bishop created an unstoppable armada of pawns that Foisor, of Baltimore, Md., could not slow down. 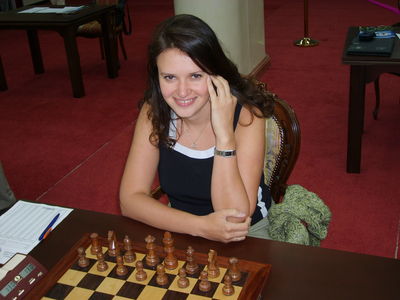 The victory comes combined with a loss by Zatonskih’s closest competitor. For most of the tournament, Camilla Baginskaite trailed the leader by one point, but she suffered her first loss today at the hands of the resurgent Irina Krush. Krush, of Brooklyn, N.Y., who began with only one win and three draws in her first five games, has won three in a row to pull into a tie with Baginskaite for second place.

Baginskaite, of Sioux Falls, S.D., and Krush have a lot to play for in the final round. Not only is there a lot of prize money still at stake ($12,000 is the second prize), but the top two finishers in the tournament will qualify for the next Women’s World Championship, to be held in Istanbul, Turkey.

Zatonskih has already qualified, but if two or more women are tied for second after tomorrow’s round nine, a fast-paced tiebreaker will be played to decide who is awarded the second spot in the championship.

One woman’s world championship qualification hopes all but ended in round eight when Alisa Melekhina, 18, of Philadelphia, Pa., lost her second game in three rounds. She had been undefeated through the first five rounds, despite playing many players who are vastly more experienced. Today she lost to Iryna Zenyuk, of Pittsburgh, Pa., who said she received encouragement from friends in her native Ukraine. They have been staying up until 5 a.m. local time to follow her matches online.

“Yesterday I was so down,” Zenyuk said. “People I (train) with said, ‘You have to come back, you have to fight.’”

Zenyuk declined to say who her supporters were, leading some to believe she has some very strong chess players on her support team.

Also rebounding today was 19-year-old Yun Fan, of Greencastle, Ind. She played several sacrifices against third-seeded Rusudan Goletiani, including both of her knights and both of her rooks. Still in college, Fan said she was proud of the game, but did not expect her non-chess playing professors to understand the beauty of her game.

After beginning the tournament will several losses, Fan has won two games out of her last three. Goletiani, of Hartsdale, N.Y., has underperformed all event and said she is just looking to get the tournament over with.

Tatev Abrahamyan, of Glendale, Calif., also showed resiliency in round eight. She won her second game in a row despite a rough beginning to the tournament. Abrahamyan’s pieces were bottled up most of the game but she opened a lane and her queen, bishop and rook came flooding in to suddenly checkmate Battsetseg Tsagaan, of Ellicott City, Md.

For complete standings, go to www.saintlouischessclub.org/US-Womens-Championship-2009/standings.

Round nine play starts Monday at 10 a.m. Central time. Games can be followed live at http://www.saintlouischessclub.org/US-Womens-Championship-2009/Live-Coverage and the broadcast can be heard at www.chessclub.com/chessfm.

For a complete listing of all events surrounding the 2009 U.S. Women’s Chess Championship, go to www.saintlouischessclub.org/US-Womens-Championship-2009.