Fabiano Caruana takes draw in final round to win the trophy

New Delhi, July 2: Fabiano Caruana took no chances and played a solid 30-move draw against Wesley So of the Philippines to take the title at the inaugural AAI Grandmasters Chess Tournament on Saturday. India’s Krishnan Sasikiran finished sole second, one point behind the winner.

The World Junior No. 1 Caruana of Italy emerged winner with seven points in the double round-robin Category 17 tournament. His only loss in the 10-round event came in the ninth round against Viktor Laznicka.

Sasikiran finished sole second with six points as he drew his final round against Women’s World champion Hou Yifan of China in Ruy Lopez Breyer where the Indian had black pieces.

In the third game of the day, Indian National champion Parimarjan Negi split the point with Viktor Laznicka of the Czech Republic from a 42-move Caro-Kann, which the Czech player admitted he knew nothing about. 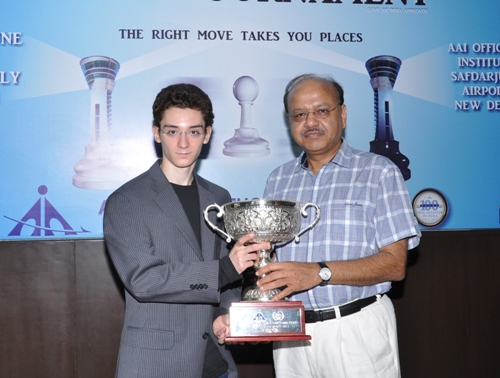 Fabiano Caruana, winner of the AAI Grandmaster​s Chess tournament receives his trophy from Mr. VP Agrawal, Chairman of the Airport Authority of India 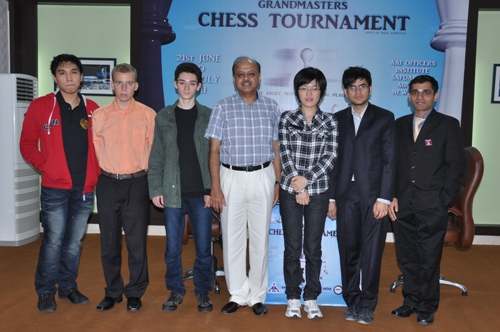 So the tournament that began with three decisive results two weeks ago ended with three draws on the final day. Replay the games with computer analysis.

Caruana played d4 on the opening move, making it clear that he was not going to take any risks. He duly got his draw from a Catalan. “I thought I would play for a win if there was a way, but yes I was not going to take risks. I certainly did not want two losses. Except for that loss in ninth round (to Viktor Laznicka) it was a good tournament for me,” he said with a smile. “Overall it was a fine tournament and I enjoyed and it is always good to win a title.” 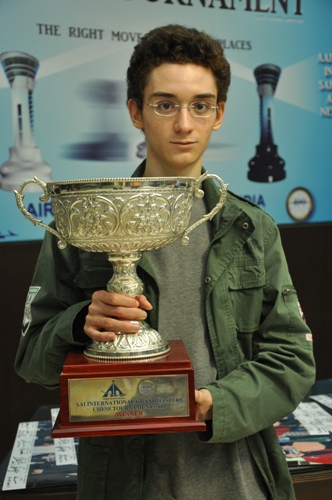 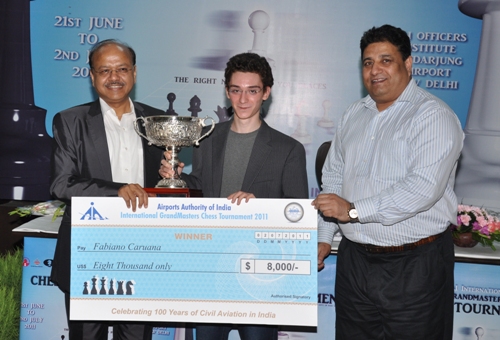 Mr. V P Agrawal, said, “It was great seeing six young Grandmasters battle it out for the last two weeks. I am sure many of these players will scale even greater heights in their career and this tournament will stand out in their memory. My congratulations to Fabiano Caruana, who lived up to his top seeding.”

Sasikiran was quite content with the latter part of the tournament. “After the two losses I had at the start of the tournament, I felt it was good recovery with four wins and four draws and no more losses,” he said. “In the final round I thought if I got a clear advantage I would try and go for a win. But it turned out to be a draw, which is fine.”

On the tournament overall, Sasi added, “I was playing a tournament at this level (Category 17) after a very long time. I enjoyed it but I would have liked to score a little more. I did have chances in some of the other games, but I suppose it is alright. Now I need to prepare and take some rest before the World Team Championships.” 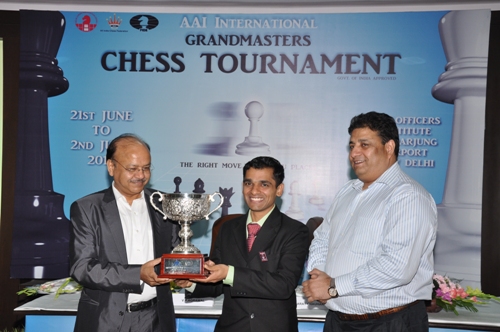 Viktor Laznicka re-iterated what he said earlier. “I was quite happy with the first part of the event, but the second half saw some poor play and I was very disappointed. Maybe the win over Caruana was the only high point for me in the second half,” said the Czech player.

Parimarjan Negi was somewhat disappointed with the tournament. “An even score or a plus one was my target, but it did not happen like that for me. It was a combination of small factors but hopefully I will quickly make up for this. Overall it was great to have a Category 17 event like this as it is very good for us Indians to have such events at home,” said Negi. 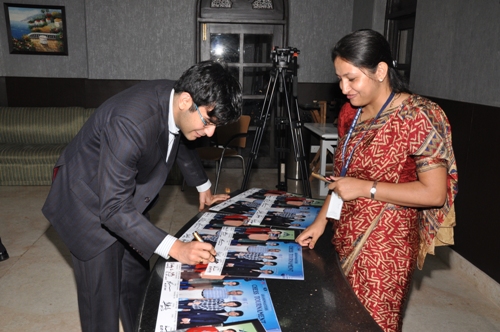 GM Parimarjan Negi signing the photograph with all players

Wesley So hoped he would be able to make amends on his next trip to India. “I enjoyed my visit, but I wish I could have played better. Maybe next time, but the tournament was very well conducted,” he said.

Hou Yifan, the Women’s World champion was happy with all the arrangements but was disappointed with her own results, which saw her finish last.

The ceremonial opening moves for the final round were made by Mr. V P Agrawal, Chairman of the Airport Authority of India. 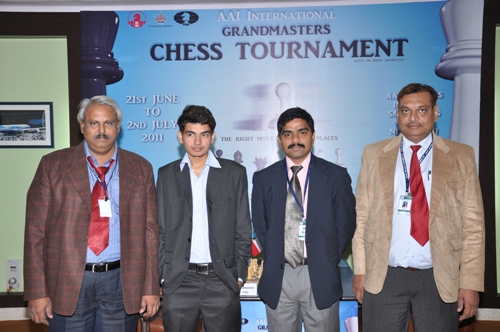 The team of officials

Final standings after the tenth round:

Results of the tenth and final round: F Caruana drew with W So; H Yifan drew with K Sasikiran; Negi P drew with V Laznicka

New Delhi, June 6: The reigning women’s world champion Hou Yifan of China is all geared up for the upcoming inaugural AAI Grandmasters Chess Tournament in New Delhi beginning on June 21. The 17-year-old, who last year became the youngest-ever world champion in either men or women’s section, will become the first women’s reigning champion to play in India since Maya Chiburdanidze played in India the early 1980s.

With less than two weeks to go, preparations for the inaugural AAI Grandmasters Chess Tournament are in full swing. Even as the venue at the AAI Officers’ Institute near Safdarjung Airport, New Delhi is being renovated into a world-class venue, the six players are busy preparing for the event in their respective home countries.

Apart from Hou Yifan, the other participants will be World Junior No.1 GM Fabiano Caruana of Italy, Philippines’ No. 1 GM Wesley So, Czech Republic No. 2 GM Viktor Laznicka, India No. 2 GM Krishnan Sasikiran and the reigning Indian National Champion GM Parimarjan Negi.

“The game was given to the world by India and we also have the world champion from India in Viswanathan Anand. So it is only logical that the AAI supports an endeavour which showcases India’s ancient game and young talent from around the world,” said Mr. V P Agrawal, Chairman Airports Authority of India.

Hou, who interestingly will be challenged by India’s Koneru Humpy for the world title later this year, is using the AAI Grandmasters tournament as part of her preparations. She has already played in numerous events this year with mixed results.

Hou Yifan was recognized as the Best Sportswoman in China a sport that is not included in the normal Olympic programme. 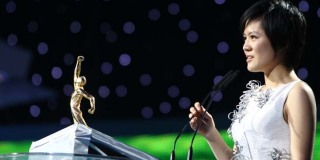 An early qualifier for the World Cup 2011 to be held in Khanty-Mansiysk, Russia in August, Hou recently won the first-ever Chinese Female Professional chess tournament held in Wuxi, Jiangsu in China in April with a highly impressive score of 9/11.

Hou Yifan, however, had a somewhat disappointing result in Asian Individual, where playing in the Open section, she ended 33rd in Mashhad, Iran. The event was won by India’s Pentala Harikrisha.

Three of the players in the tournament included Krishnan Sasikiran (sixth), Parimarjan Negi (ninth) and Wesley So (12th). This trio will be up against Hou Yifan once again in the AAI Grandmasters tournament.

Earlier this month, playing in a very strong Open tournament in Danzhou, Hainan in China, Hou Yifan was out of form and finished last among 10 participants.

Hou Yifan hails from Xinghua, a small prestigious town, which is famous for holding top level Chinese individual chess tournaments for the past three years. The town has two women grandmasters, eight national champions and over 10,000 playing youngsters live here. Besides, many talented chess players are trained for Chinese Chess National Team. Local authorities have made efforts to organize chess activity and training classes in primary schools to promote chess in the town and region.

According to Susan Polgar, one of the strongest-ever women’s players, but now retired, Hou Yifan is preparing for her match against Humpy and all these Open events are part of her larger plan.

Big time chess returns to India for the first time since the mid-1980s when Delhi hosted a string of Grandmaster tournaments. Indians, including Viswanathan Anand benefited from those a lot.

The AAI International Grandmasters Chess Tournament organized by the Airports Authority of India is the highest-ever rated tournament for more than three decades in India.

The AAI, which is a leading Public Sector Enterprise under the Ministry of Civil Aviation, as part of its Centenary Celebration of Civil Aviation in India, is organizing the “AAI International Grandmasters Chess Tournament 2011″.

“We have been supporting various games and young sportspersons, including chess. Parimarjan Negi, the current National champion, and who has broken many records and Dronavalli Harika among women are supported by AAI. Negi, incidentally will also feature in AAI International Grandmasters Chess Tournament,” added Mr. Agrawal.

“It will be a treat for chess lovers in Delhi and all over the country. We will have all modern facilities and use the event to promote the game in India by inviting youngsters to watch and learn,” said Mr. Bharat Singh Chauhan, President, Delhi Chess Association, which is also supporting the event.

“To have a Category 17 event in India has always been Delhi Chess Association’s dream. And now that Delhi also has its first-ever national champion in Parimarjan Negi, it is only logical that we have the tournament in Delhi. The Airports Authority of India, who have been generous supporters of the game, as also other sports, need to be congratulated for making a tournament like this come to life.”

This will be India’s first ever Category 17 chess tournament with a unique group of six grandmasters playing in a double round robin event from June 21 to July 2, 2011.