Aronian to meet Grischuk in the first match 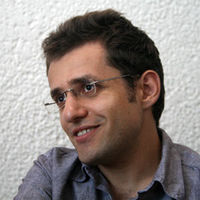 Levon Aronian, currently one of the 3 players above 2800 rating, has started active preparation for the Candidate Matches 2011. According to information of Armchess.am, Aronian began his main trainings in Tsakhkadzor. Among the coaches of the 2800 player are GMs Gabriel Sargissian, Arman Pashikian, Hrant Melkumyan, Ashot Nadanian, Chinese GM Wang Hao. After Aeroflot Chess 2011 they will be joined by GM Sergei Movsesian. The training will last the whole month of February.

The first opponent of Aronian for the Candidates Matches 2011 is Alexander Grischuk. The Russian player has just completed his participation at Tata Steel Chess. He entered the matches after the refusal of Magnus Carlsen to participate in the World Championship 2012 cycle.

The winner of the match Aronian – Grischuk will meet the winner of Vladimir Kramnik – Teimour Radjabov.

All pairings for the Candidates Matches here.

The winner of the Candidates Matches will play World Chess Championship match against Viswanathan Anand in 2012.

Video from the recent World Blitz Championship in Moscow.