Negi also recipient of the Arjuna Award in August this year 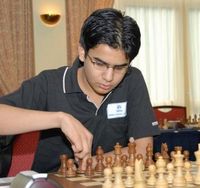 Barring World champion Viswanathan Anand, no other chess player in the country has ever received the kind of felicitation that Amity School extended its student and chess prodigy Parimarjan Negi on Tuesday.

In a well-attended and well-organised function at the Amity University auditorium, the 17-year-old Grandmaster was presented with a well-crafted heavy-weight trophy along with a cheque of Rs. 200,000 for being the recipient of the Arjuna Award in August this year.

“I was completely overwhelmed by the experience,” said a grateful Negi and added, “I owe it entirely to the Amity group, my principal, staff and fellow students.”

The Founder-President of Amity Group Dr. Ashok Chauhan and Chairperson Dr. Amita Chauhan, who have supported Negi since he joined the school in 1997, not only hailed the youngster’s achievements but also admired their ‘celebrity’ student’s upbringing and demeanour.

“I must admire the role played by Parimarjan’s parents in shaping his career. Over the years, I have seen many parents of talented children but never humble a couple,” said Dr. Ashok Chauhan.