Article by Rakesh Rao published in The Hindu

Back to back success in the Politiken Cup and the Malaysian Open has made Grandmaster Parimarjan Negi look ahead with renewed self-belief and zeal.

Performing above his rating and expectations, this 16-year-old signed off with last-round victories in both events to emerge as champion. This made British GM Nigel Short remark, “winning with black in the last round is difficult when your opponent only requires a draw. This shows real mental toughness.”

Surely, toughness and steely resolve over the board were hard to miss in Parimarjan’s recent outings. “Unlike in the past, I think, I played precisely when I needed to,” was how Parimarjan chose to put it when asked for the reason for his twin-success. “Over a period of time, I’ve realised that to win, you don’t have to do something special. You have to be precise when it matters,” said this youngster on whose shoulders success rests lightly.

Since 2006 when Parimarjan became the second youngest Grandmaster in history, the chess world has followed his progress with great interest. In spite of the pressure of expectations, the success-graph of his prodigy has shown an upward curve. Earlier, this year, he became the youngest Indian and only the fifth in the country to touch the 2600 mark in rating.

When the new rating list is released on September 1, Parimarjan will not only enjoy his career-best rating of 2615 but also the best-ever fifth ranking in India behind Viswanathan Anand, K. Sasikiran, P. Hari Krishna and Surya Shekhar Ganguly. 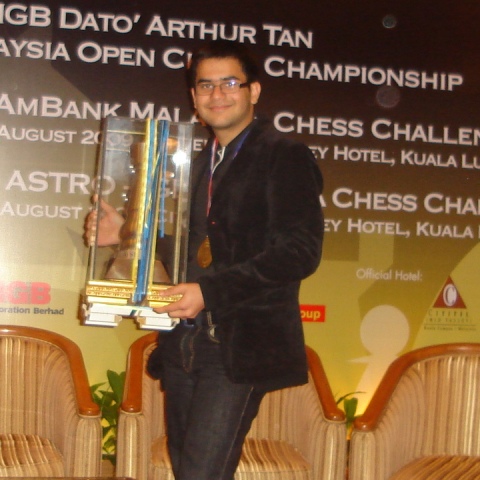 Parimarjan, who scored a creditable 90 per cent in his Class X exams this summer in spite of playing chess for the better part of the academic year, feels that he has become “clever in preparations”.

Taking a closer look at the quality of his recent games, Parimarjan says, “I’ve widened my opening repertoire and thrown in a few surprises, that often helps in foxing my rivals. Changing the choice of opening does not always work but that raises the chances of my getting a position I like. Over the board, my time-management has also improved.”

Parimarjan’s progress has helped him attract an invitation from the organisers of the 2010 Corus chess championship in Wijk aan Zee in the Netherlands. Having played in the ‘C’ group of the prestigious event in 2005, 2007 and 2008, Parimarjan, for once, will be part of the 14-player Group ‘B’. “I am grateful to the Corus organisers to have extended the invitation. It is a huge opportunity for players like me. Corus is the kind of event every chess player worth his salt would like to play,” said Parimarjan.

P. Hari Krishna, along with some of the proven young talents like David Howell, Wesley So, Anish Giri and Arkadij Naiditsch are likely to be part of Group ‘B’ with Anand aiming to regain the title in the elite Group ‘A’. For now, Parimarjan is headed for the Kolkata Open that begins on Tuesday. Though Parimarjan is not among the favourites, yet another impressive performance can be expected from this in-form underdog.

Read the full article on The Hindu pages