The World Champion Viswanathan Anand visited as guest in the ongoing 7th Parsvnath International Open Chess Tournament at Modern School Barakhamaba Road, New Delhi today from 1700 hrs to 1800 hrs. The visit was scheduled for the end of today’s round of one of the most important Indian tournaments. Viswanathan Anand along with his wife Aruna visited the tournament hall and talked to players and spectators. 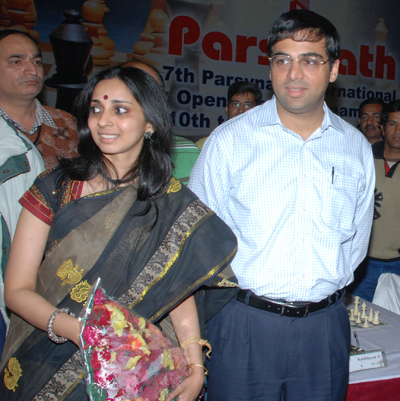 The 7th Parsvnath International Chess Tournament is currently led by Kazakh Grandmaster Petr Kostenko defeated Indian hopeful Parimarjan Negi in the seventh round and maintaining his sole lead with seven points from as many rounds.

Playing black side of French Defence Winawer variation, Kostenko displayed a fine tactical game to overcome Negi in 53 moves. A pack of ten players, including national champion Surya Sekhar Ganguly, Abhijit Kunte and Dibeyandu Barua trailing behind the leader with a drift of full point.

In the second board, International Master SP Sethuraman and Russian Granadmaster Mikhail Ulibin signed the peace treaty after 34 moves while Indian International Masters Roktim Bandyopadhyay and Karthikeyan shook hands within an hour of the start, signaling a drawn result. Ganguly defeated Deep Sengupta and Abhijit got better of young International master Shyam Sundar in the seventh round.

There is no stopping for the upset galore in this edition of the tournament, as experienced Praveen Thipsay joined the casualty list as he lost his seventh round game against young Vishnu Prasanna while Shashikant Kutwal stunned highly rated Uzbek grandmaster Safin Shukhrat.

With only two round remaining in the biggest open event of the country, Ganguly, Kostenko and Russian Grandmaster Mikhail Ulibin now share the lead on 7 points each while as many as 12 players including Abhijit Kunte and Dibeyandu Barua are in proximity of the leaders with 6.5 points apiece.