The latest information from the WCC in Sofia

Viswanathan Anand is already in Sofia for the World Chess Championship match. There is confirmation from Hilton Hotel in Sofia that all rooms of Anand’s team are already inhabited. The defending World Chess Champion has not informed the organizers for the hour of the arrival, as he wanted to escape journalists at the airport and keep his seconds secret to the last moment.

The special curtain that prevents visual contact players->audience and allows the chess fans to see the scene is also in Sofia. It costs about 2500 eur and has size 11×11 meters.

The playing hall is already prepared and it was inspected by the India embassador in Bulgaria. You can find the visual presentation at the photo gallery

More details from the opening ceremony

A few days ago Chessdom informed about the video and music presentations at the opening ceremony. Today during the press conference our journalists learned that the drawing of colors will be performed with special white and black kings in the style of the Second Bulgarian Kingdom, the first one to enter the pre-renaissance period in Europe.

Stay tuned for details and photos on Chessdom.com! 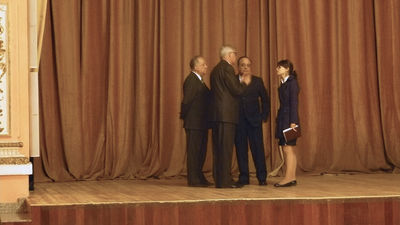 The inspection by the Indian embassador, at the photo he is on the scene of the WCC match