Apples and oranges on Vishy’s mind

Aruna Anand, wife and manager of the World Champion Viswanathan Anand, is on a working visit in Sofia. She arrived February 7th at 13:30 with a Lufthansa flight via Frankfurt. The idea of the visit is to check the conditions offered by the organizers of the World Chess Championship, the playing hall, and to make sure the players will be provided equal treatment.

One of the main destinations for Aruna Anand was the proposed by the organizers playing hall – the Military Club in Sofia. It is the ex venue of Mtel Masters and was chosen by the Bulgarian Chess Federation instead of the National Palace of Culture due to the financially more viable conditions offered. A full report with team Anand’s desires will be prepared these days, but here are some of the major requests heard during Aruna’s visit. As the Military Club main hall is not very large in size, a maximum of two hundred people will be allowed to enter. Furthermore, all entrances to the hall will be blocked, except for the main one, while the players will be provided a separate route that will include all the needed security checks. The stage will be separated by a “special curtain” that blocks the visual contact between the audience and the players. Video control will be enabled at the security points, the topic that will be open for discussion between Aruna Anand and the organizers again today. Additional details to be checked and agreed upon are the access way to the bathroom, the rest zone, and the lightning. (video from the Military club in 2008 here)

Aruna Anand, cited by the national daily newspaper 24chasa, was clear stating, “We hope the stage will be ready by April 1st, afterwards it will be late to check the details.” 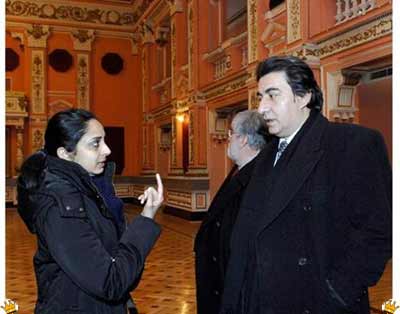 Aruna Anand was accommodated in Hilton, together with an accompanying person and the head of the inspection FIDE Deputy President Georgios Makropoulos. The same hotel was chosen by Vishy Anand during his previous visit in Bulgaria. Hilton will also be the base for Anand’s team for the WCC match with Topalov.

The way from Hilton to the Military Club is not long, but goes through some of the busiest streets. Traffic jams are very common during the day. The shortest possible route of Anand is 2,161 kilometers taking the streets Fritiof Nansen and Vasil Levski, with a left turn through Ivan Asen that goes directly to the hall. However, the latter is a rather narrow street and with high likelihood of unexpected traffic congestion, so there is a better way – instead of a left turn, it is much faster to keep going on Vasil Levski until Sofia University, and after a long and patient (but predictable) waiting at the traffic light to turn left.

Both alternatives take no more than five minutes by car during weekends, but on working days and during rush hours the trip can span up to more than half an hour. Check out the two recommended roads at the map below. The green flag marks Hilton Hotel, the red one marks the Military Club. The crown indicates the Sofia office of Chessdom, just 1 minute walking distance from the playing hall. 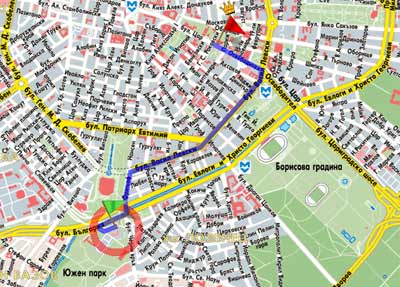 The fastest road between Hotel Hilton and the Military Club, the distance that Anand will cover on playing days is about 2,4 kilometers through heavy traffic jams 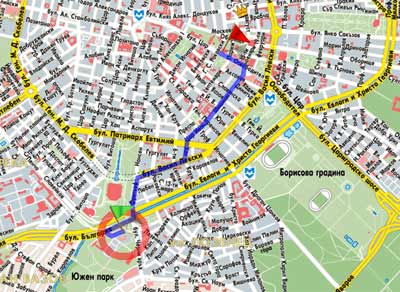 This is a shorter way, but more difficult to predict the traffic on it

A special note to all visitors and journalists: regretfully, there are no free parking places around the Military Club. The closest place to leave a car is at the small streets around Chessdom’s office, where parking is possible for 0.50 eur/hour next to the sidewalk (payable by SMS), or the municipal parking in front of the national bank, which is mostly full over capacity during work hours. There are also a few private paid parking places for 3-5 euro for the whole day. It is a difficult system for visitors and if you are not acquainted, it is advisable to avoid parking in the center of the city and use the public transportation or taxis.

One innovation compared to Mtel Masters last year is that the metro now has a stop right in front of the playing hall. Thus, choosing a hotel next to a metro stop, even in the other end of the city, would be a good move.

Apples and oranges on Anand’s mind

Viswanathan Anand just finished his participation at the Corus Grand Slam chess tournament, where he shared the 4th place with Hikaru Nakamura. Asked by TOI about his performance in regard to the coming World Championship match with Topalov, Anand stated that the two matches are “apples and oranges” and cannot be compared. “Playing a tournament especially like Corus that has 13 opponents is a very different experience. You train for different styles and the colours of the draw can have an impact on the way the event goes. In a match, it’s only one person. So it’s very different.”

Currently Anand is in Spain where he will take a break from chess and will start his preparation for the match with Topalov. 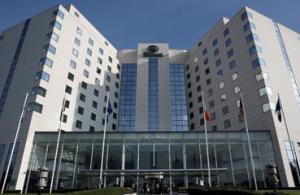