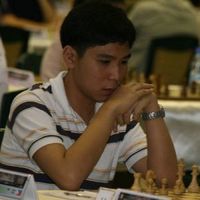 “I’m ready. It’s a big challenge for me, but I will try my best,” said So, who will leave for for Wijk aan Zee via KLM Airlines.

The event will be held from Jan. 15 to 31 at the De Moriaan Community Centre in Wijk aan Zee, Netherlands.

The 16-year-old So, whose ELO rating of 2656 put him at No. 76 in the world in the Jan. 1 FIDE quarterly ratings, will now compete in the much-stronger, category-16 Group B where the average rating is ELO 2627.

“I know most of the players in Group B, they are all good and talented,” said So, who topped Group C last year with a 13-round total of 9.5 points on seven wins, five draws and only one loss.

“But I have prepared hard for this tournament since my arrival from the World Cup in Khanty-Mansiysk, Russia last month,” said So, who is backed by National Chess Federation of the Philippines (NCFP) president/chairman Prospero “Butch” Pichay and Reginald Tee.

This year, So is seeded sixth in the 14-player field where GMs Arkadij Naiditsch of Germany, Liviu-Dieter Nisipeanu of Romania, and Pentala Harikrishna of India are the top participants.

All information about Corus chess 2010 here.